The Dynabook and its learning models 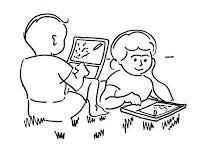 In Alan Kay's Dynabook it is best to learn something kinesthetically, then iconically, and finally the intuitive knowledge will be in place to allow the more powerful but less vivid symbolic processes to work at their strongest(Kay1990).
What said scientific studies on the field of learning by doing and other related pedagogical approaches?

Meta-analysis (Filip Dochy et al.) shows that learning-by-doing is beneficial with know-how activities, particularly when the know-how is directly related to kinetic manipulations. When learning new notions, on the other hand, the benefit is at best null. Moreover, another study[1] revealed that the required manipulations can be an obstacle when learning, requiring too much cognitive attention from the learner, exhausting the available cognitive resources to effectively learn the targeted notions. Worse, the less the learner knows about the notion, the more difficult it will be for him/her to progress and learn[2].

These studies prove learning-by-doing is beneficial in some situation but is not a universal learning model. What really matters from the learner perspective is to be active... in his/her own head!

Inquiry learning is another model the Dynabook was designed to facilitate, as brilliantly illustrated in the Squeakers documentary[3]. Inquiry learning, first conceived by Rabelais, Montaigne, and Rousseau, is a very powerful idea. Its assumptions is that knowledge discovery is intrinsically linked to the human progress. This learning model is at its best to learn scientific methodology, particularly under a strong teacher guidance as seen in the Squeakers documentary; however this learning methodology is not effective to learn scientific facts and notions[4].

The other learning model cherished by A. Kay is the problem solving approach[5] favored by the constructivism movement. The Dynabook design, particularly its GUI, favors the approach of learning by doing. It is reflected in the nature of Smalltalk: direct modifications of its user interface and its library system, the live development techniques, and learning from the environment itself. All these technical paradigms open the door to direct manipulations and learning by doing.

The Dynabook concept is based on these learning models - learning by doing, inquiry and problem solving approaches, all linked to the constructivism movement. These approaches are not universal and to be effective they must be used with dedicated and appropriate guidance from a teacher.

It is true that there is a strong romance in the Dynabook concept: a learner discovering a new concept and building its computerized model[7]. There is a dual cognitive constraint here: an as-yet unknown concept and programming its model. It is unlikely to happen.

Nevertheless it does not make the Dynabook concept irrelevant. On the contrary it should be given more attention to facilitate other learning approaches scientifically proven to be effective. Moreover, the Dynabook concept was thought to be a malleable computing tool. This remains a necessity so that it can be adjusted to any new effective learning approach emerging in the future. A. Kay's Dynabook approach is centered around the child. Sadly the teacher - or any other person playing the role of learning guide - is mostly invisible. It will be very interesting to look at the Dynabook from the teacher perspective, too, taking the point of view of the person owning the knowledge.
What does it mean for Dynabook to be a malleable tool from this perspective?
Any opinion on the topic? If so leave a comment for further reflection.
Thanks to Chao-Kuei Hung for his editing.