How to resolve a real world problem with perpendicular bisector?

Mathematics is the tool of the mind to build simplified model of a real world problem situation. Then within its model, the mathematics toolset helps to build solutions. We present in the following paragraphs a very simple example of this process with the use of the Dr. Geo software.

Here is the landscape of a road network along with two transmitters (Emetteur1 and Emetteur2 in the picture bellow). [1] A car radio always receives the radio signal from the closest transmitter.


Which are the portions of the road network where a car receives the signal from transmitter 1 (Emetteur 1)? 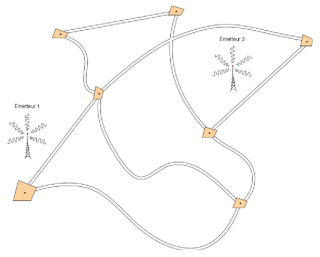 To resolve this problem, we import within Dr. Geo the picture above (with a drag and drop within Dr. Geo), then use its mathematics toolset to model then to resolve.

First step, from the real world situation we introduce geometric objects: two points as models of the two transmitters, and a segment with these two points as its extremities .

As our mathematics model is set up, we move away from the real world situation picture to the Euclidean plane. From here, we use the perpendicular bisector to divide the plane into two parts, we know the property of the segment's perpendicular bisector -- it divides points on the plane into three subsets according to each one's distance from the two extremities. This is exactly what we need to find the positions closer to transmitter 1. 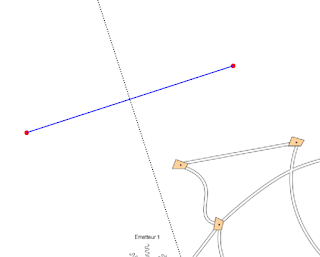 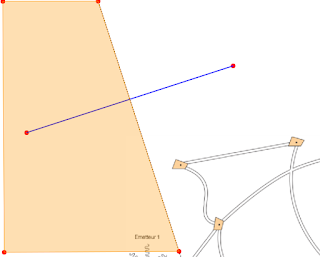 Move back in the real world

We resolve in our mathematics model, now we need to move back in the real word situation, so we drag back the real world situation picture. The portions of the road network where the signal comes from transmitter 1 are painted in orange! 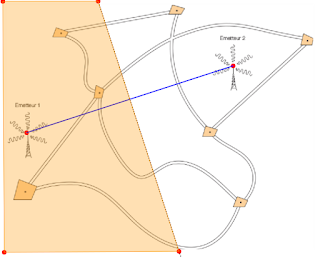 We hope this example simple enough to explain explicitly the process of mathematics modeling to middle school students. The resulting Dr. Geo sketch.