Drawing the Parabolic Trajectory of an Object under Gravity

When you throw an object into the air, its trajectory is a parabola. How do its instantaneous velocity and the vertical and horizontal components of the instantaneous velocity change over the course of its trajectory? What happens when the initial speed is larger? Smaller? What happens if the gravity were larger? Smaller? Zero? Negative? Holding gravity and the initial speed constant, in which direction can you throw to make the object reach the farthest point along the horizon?

This sketch created using Dr. Geo can help a high school physics teacher explore all these questions with her/his students.
In this article we will show you how to construct this gravity sketch. The reader is assumed to be familiar with the basics of Dr. Geo such as drawing parallel lines and changing the colors/names/styles/... of the points and lines.

Thanks to Hilaire for editing and typesetting the article in PDF for a much more pleasant for reading and printing. We also need the gravity vector. But later you would find that it's difficult to drag the gravity vector directly because it's too close to the origin (if we want to see the interesting portion of the parabola). So we create a point "Gravity Handle" along the negative y-axis at a comfortable distance, and create the point "g" as the end point of the real gravity vector at roughly 0.2 or 0.25 times distance. To do this you need to create a number "g-scale", set it to 0.2 or 0.25, and use the Homothety transform (i.e. homogeneous dilation) to scale "Gravity Handle" down towards "O".
[Download step2.fgeo]

The Focus and the Directrix of the Parabola

To draw the parabola, we need to find its focus and directrix. Obviously the axis of the parabola is the vertical line at d=V0x*tx distance away from the y-axis where tx is the time for the vertical component of the velocity to reach zero. Therefore d/V0x = V0y/(-g).
At time tx the object also reaches the hightest point of its trajectory at the height of hx=-g*tx^2/2=(d*V0y)/(V0x*2). Therefore 2*hx/V0y = d/V0x. Now we can draw the parabola. Recall that it is the locus of all points that are equally distant from the focus as from the directrix. Finally we will draw the instantaneous velocity at point "r". 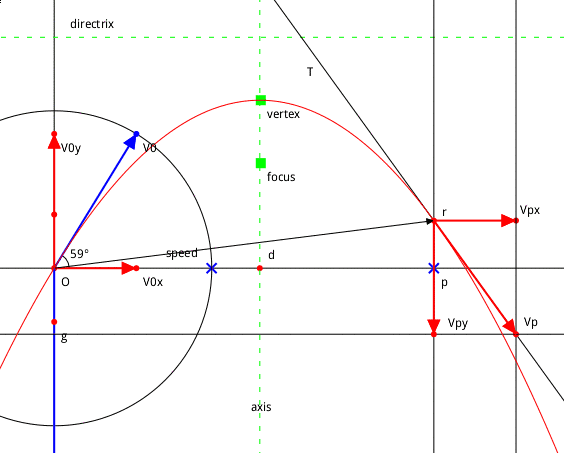 My first attempt created a sketch that became broken when the initial velocity moves out of the first quadrant (x>=0, y>=0). I guess it was because at some step an absolute value (length) was taken. It's probably better to think in terms of and make use of parallel lines instead of sign-less lengths when you construct a sketch.
In fact Dr. Geo has very powerful Pharo scripting capabilities. However, drawing this sketch using only the basic drawing primitives makes it so... classic and so much more fun. I also learned one or two properties about parabola that I never knew as a high school kid (or as an adult).